Cats have a hard time picking a winner

Cats have a hard time picking a winner. Cats have such a soft gentle nature, we don’t want to hurt anyone’s feelings.

A few days ago I offered to give away my birthday party hat. Mrs. Hodges wrote out seven pieces of paper with seven numbers on them. I know you can not see number seven. But, it is there.

She said I was supposed to pick one number and the comment that corresponded to the number I chose would get one of my hats.

The number I chose was number five. And number three belongs to my dear friend Laura McCoy and her dog Edelweiss. She will be receiving the hat I have on in the photograph. 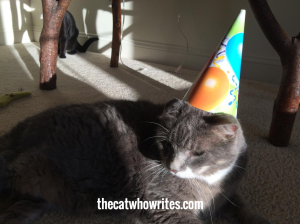 But, I just couldn’t bear to have the other cats sad and unhappy about not receiving one of my hats.

Cats have a hard time picking a winner. We don’t want to hurt anyone’s feelings.

I am also sending a hat to my Grandmother, Berdeane, to Rhonda in Australia. One hat to Marie and her four cats, MacKayla the Empress, Joel Gray, William the Orange and Giblet Paws. Hats will also be sent to Beth Anne and to Shelly and Skittles.

I do love all of my friends who left a comment on my story, Cats love birthday parties if they can wear a party hat.  I hope they like their hats.  I will even sign them.

All my love,
xo