If only cats had thumbs 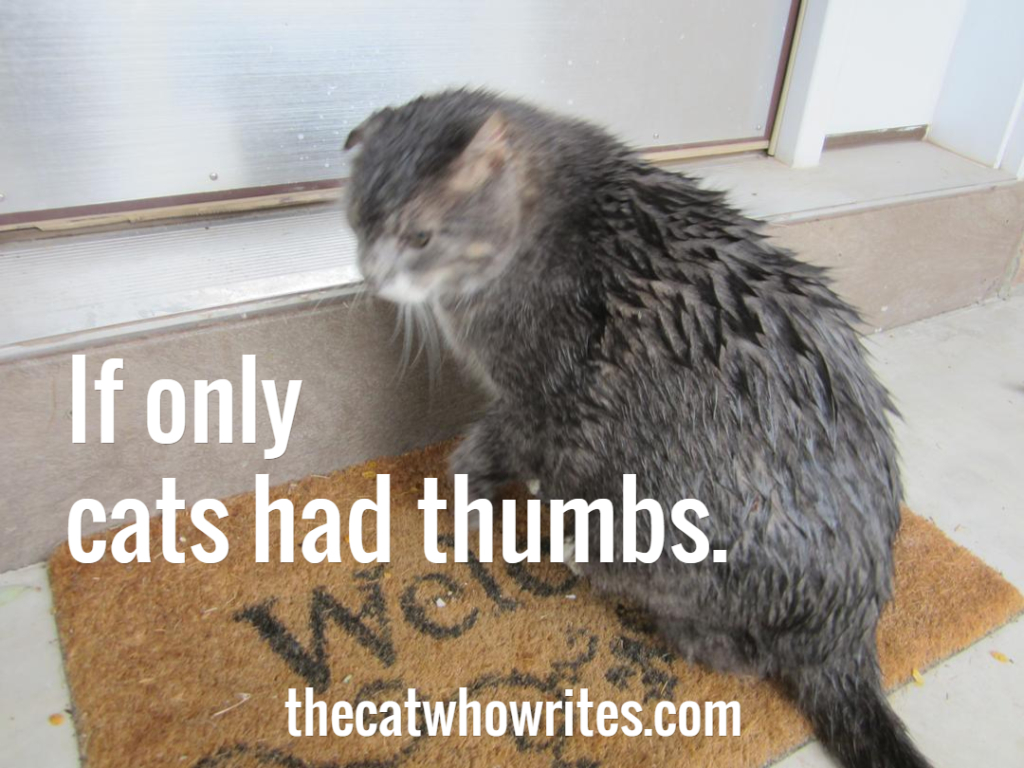 It was raining. And I was outside. I was hiding under a bush in the front yard. When I saw Mrs. Hodges car pull into the driveway I came out from under the bush and sat on the welcome mat in front of the door.

I had to wait for Mrs. Hodges to open the front door.

If only cats had thumbs.

I could go the bathroom in neighbors flower beds all the time and I wouldn’t have to use one of the seven litter boxes in the house.

If cats had thumbs we could drive a car and get a job. We could run a marathon and run for President. The whole parliament could be run by cats. There would be a litter box under every cabinet chair, and in the Oval Office.

If cats had thumbs there would be no more war. At the peace talks The President Cat of the United States would sit in the lap of the Enemy and purr and the enemy who wanted to bomb us would relax and feel the real peaceful feeling that only a cat can bring.

If cats had thumbs there would be world peace.

“Mrs. Hodges if I had thumbs would you still clean my litter boxes for me?”

“Yes, Pooh. I would still clean your litter boxes for you. And I would come to The White House and clean all the litter boxes you would have. One in each of the one hundred and thirty-two rooms.”

“If I had thumbs and was  The President Cat of The United States would you call me President Pooh?”

p.s. I really don’t understand humans. They whine all the time. “I can’t do this. I can’t do that.” Humans have thumbs. They can do anything. They can hold a pencil. They can flush the toilet. Humans can hold a coffee cup with one hand.

The problem with humans is they think they can’t do something, they don’t do it. They stop trying.  The problem is in their mind. Perhaps their main problem is they don’t have a cat to cuddle. Mrs. Hodges has a real hard time with…..

“Hey Pooh. This is your blog. Don’t tell my secrets.”

Please tell me. What would you do if you had thumbs?

As always I love to hear from you. You can click here to comment. And if you know a friend who likes cats will you please introduce me to them.

All my best,
xo
Love Pooh