The kitten has a name 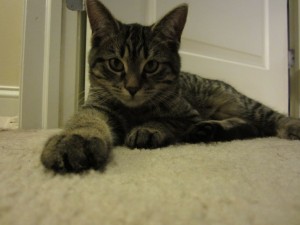 She decided to observe the cat and name him based on his behavior. The name she picked out of the cup, “Scout” was vetoed by one of my staff, as it was a name she was almost given. The staff member would have been named Scout if Demi Moore hadn’t named her daughter Scout in 1991.

The kitten was called Uno for a day. She thought it was cute, as he was only one cat, but Uno didn’t seem quiet right.  He was called Moon for three days, as he only came out for part of the day.  After a week the kitten was no longer hiding under the bed, so the name Moon was not appropriate.  I personally wanted to name the cat  Ford or Dodge. The name of the vaccine medicine on his birth certificate was Ford Dodge. My staff member said Ford makes better trucks. Her friend Mr. Ufford works there as a truck designer.

However it was not my final decision to name the kitten.

She decided to name the kitten Charlie. The kitten  we got from the cat hotel  has a name. I will have to talk to her at the next staff meeting to make sure her decision is final before I order his business cards.Charlie is named after Charlie McDonnell, a British boy who makes Youtube videos. Charlie is funny and cute according to my staff member.

There are many famous Charlies. Prince Charles in England is well-known. I saw him on the television when his son got married.   Charlie Brown is also a famous Charlie. I read about Charlie Brown in the paper in the comics section. And there  is the famous Charlie who bit his brother Harry on the Youtube video, “Charlie bit me.” The video had 498,431,741 views today when I looked at it.

I am pleased with the naming of my Vice-President.  I like the name Charlie. I approve.